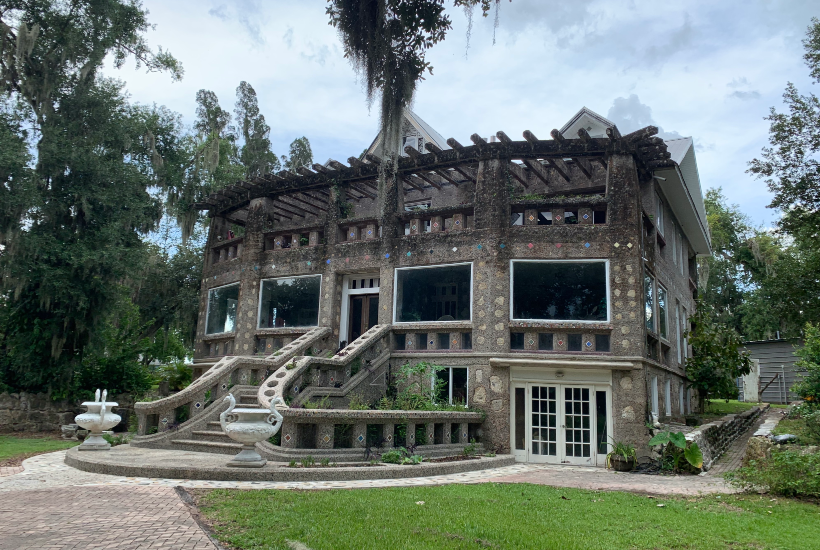 Take a Unique Tour of the Wonder House

I recently had the opportunity to tour a unique piece of Florida History, The Wonder House, located in Bartow, Florida.

The home was featured in Episode 9 of the Netflix series Amazing Interiors. The show told the inspiring story of the home’s unique history and design, as well as its journey from abandonment to its purchase by a young couple with aspirations of restoring it to its former beauty.

If you’ve read any of my travel posts, you know I love visiting places with interesting, sometimes quirky, but always inspiring stories. Once I heard about the Wonder House, I knew it was a place I had to visit! At that time, though the house wasn’t yet open to visitors. So, I followed the Wonder House’s Facebook Page and watched and waited for notice of its opening.

And then came the Facebook post I had been waiting for.  “You can now book a guided historic tour of the Wonder House.” I immediately booked tickets for the Saturday afternoon tour!

That Saturday, my husband and I arrived at the Wonder House. As we walked up the steps, we were greeted by owners Drew and Krislin, and their adorable puppy. They welcomed us to their home as if we were guests, not visitors at a tourist attraction.

There were eight people in our tour group that day. We were escorted room by room through the house by Drew and Krislin. They shared stories of the history of the home, its antiques, and the memorabilia they have collected for the home. They also described the restorations they have made since acquiring the property four years ago.

The History of Wonder House

The history of this home is as unique as the home itself.

In the 1920s, Conrad Schuck, an inventor and builder from Pittsburgh, PA. was told by doctors, he had less than a year to live. Perhaps he could live a little longer, the doctors had said, if he moved to a warmer climate.  So, Schuck and his family packed their belongings and moved to sunny Florida.

Settling in Bartow, Florida, Conrad Schuck began creating his legacy in 1926. He purchased about ten acres of property, and without any blueprints, began building a dream home for his wife and nine children. As excavation of the land started, he realized they were digging into solid bedrock. Undeterred, Conrad decided to build the entire structure out of concrete, reinforced with steel rails purchased from a railroad company.

Doing this proved to be both advantageous and cost-effective. Wood was scarce and expensive during that time in Florida. His building process allowed him to build most of the house using the natural resources on the property.

What Conrad Schuck created is indeed an architectural marvel of its time. And when you consider that most of the work involved in building this four-story, 18-room mansion was done by Schuck and his children, it’s even more impressive. The house is constructed entirely from concrete with 18” thick walls at its base. The walls are inlaid with bits of glass and tile.

Throughout the house, from floor to ceiling are handcrafted artistic details: mosaics, hand carvings, and other distinctive features such as outdoor baths on the porches, a concrete pergola over the top front porch and a fishpond on the third floor.

To combat the hot, southern climate, Schuck designed an ingenious way to keep the house cool.  He created a water-cooling system that allowed water to flow through the house.  This system of concrete channels and hollow columns that collected rainwater not only provided cooling insulation to the home but also watered the house plants as well.

But Schuck’s creations didn’t stop with the house. He built a large pond in the front yard with two 30-foot concrete bridges extending over it. And, of course, he added glass and tile to adorn the concrete.

The house was definitely not a short-term project for Conrad Schuck. Thirteen years later he was still working on it. The local residents continued to be curious about this unusual concrete mansion covered with glass accents, vines, and plants. So, in 1934, Schuck opened the home to the public and began giving tours of the property. It became known as the Wonder House and quickly became a popular tourist attraction. Shuck continued to host Wonder House tours until 1963.

Interestingly, it never became the family home Conrad Schuck had first envisioned. The family lived in a small residence nearby but never moved into the Wonder House. In fact, the house was never furnished (other than some rocking chairs on the front porch) until it was sold many years later.

And what about that one-year medical prognosis, Schuck was given? Evidently moving to Florida and creating his enchanting Wonder House was just what he needed to improve his health. He lived for 40 more years, passing away at the ripe old age of 94.

In 1964, the Wonder House finally became a family home when the Ducharme family purchased it. They made a few changes but tried to keep the structural integrity and charm of the home. They added central heat and air, remodeled bathrooms, and enclosed the front porches.

And, during the 1980s and 1990s, Lucy DuCharme opened the Wonder House to visitors for holiday tours during the Christmas season.

A subsequent owner lost the home in foreclosure in 2011. The house then sat abandoned for years and, with each year that passed, the house’s condition declined. It was unsure if the Wonder House would survive.

A Second Chance for this Florida Historic Treasure

A Second Chance for the Abandoned Mansion

But, the Wonder House was given a second chance in 2015 when a young couple with a passion for old homes and history fell in love with the home. Drew and Krislin purchased the property online at an auction and immediately went to work on its restoration.

Like the original owner, they have done much of the work themselves, spending every spare minute (and dollar) on the house. Drew is an attorney and Krislin is a teacher, so their time is limited.  Yet, over the past four years, they have made tremendous progress in restoring this rare gem of a home.

Drew and Krislin’s goal is to restore the Wonder House to its original beauty. This is their dream home, and they look forward to living in it for many years. They don’t plan on ever turning it into a full-fledged tourist attraction again, but they do want to share their home and its history with others.

And even though there is still more work to be done on the house, they have opened it for a few small tours on weekends.

Check out this recent video from Polk County Government to get an inside look of the home and see the incredible restoration Drew and Krislin are making to the Wonderhouse.

So, if you are in the central Florida area, plan to make a trip to Bartow and visit the Wonder House. You will not be disappointed.

So, what do you think of the Wonder House? We’d love to hear your thoughts. Leave us a message in the comments below.

And please be sure to subscribe to our email newsletter for the latest updates on all that is going on here at LifeReEnvisioned.com plus access to our New Resource Library with even more information.

Previous Post: « How to Quickly Clean Your House Before Your Guests Arrive
Next Post: How to Help Someone During Cancer Treatments »